First a question, then, maybe, a feature request

We’re already taking advantage of the fact that some components provide extra mask output(s) that are useful in texturing. I’m probably not alone in noticing that Terraces can be modulated to have vertical displacements, but the only texturing method available right now involves height based striation that is perfectly horizontal.

This bothered me enough to wonder if there was any way to get some kind of mask generated using the height modulation part of the Terraces device. Is such a thing even possible?

@Stephen, if anyone knows, it’d have to be you. If the question never came up before, kudos for me! I’d be happy to make it an official Feature Request if I just knew it was possible. The best I could come up with on my own involves subtracting the Terraced terrain from the source terrain, Equalizing and Colorizing the result, but that only gives one level of strata, thereabouts. I’m still experimenting, though. Another theoretical feature it suggested was a device like Terraces that would displace an RBG bitmap of “height” based striations an equivalent amount to the Terrace modulation (same source, similar input).

So, yeah. That’s it in a nutshell. What do you think? 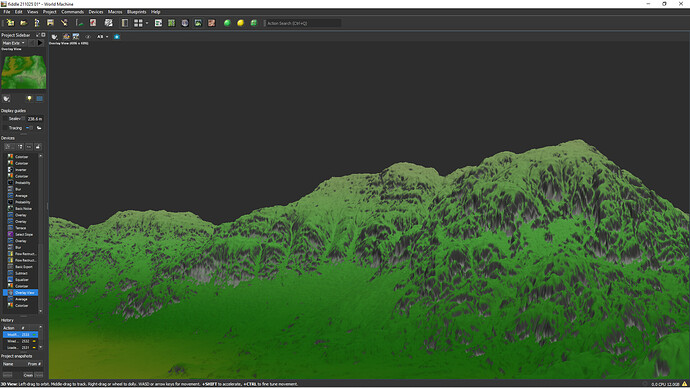 Edit: I moved on to experiment no. 2 and discovered that Erosion was complicating things. I tested it straight out of the Terraces component and discovered that I could get multiple striations. There might be a way to get better results with Erosion, so I’ll keep experimenting. Thought it was worth commenting on, though my question still stands, relegated to, “is there a better way to do this?” 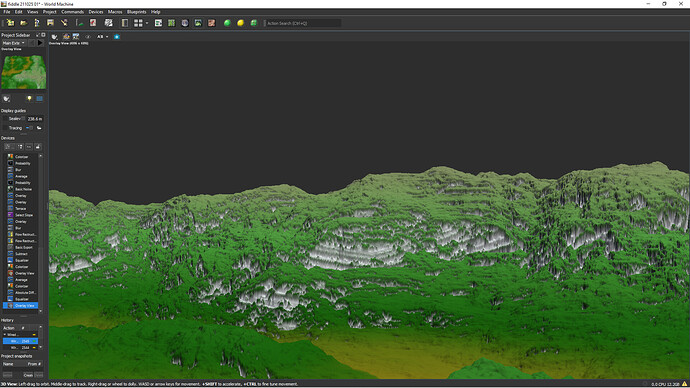 I believe the new Strata device, available imminently in the first dev build of Artist Point, should do what you want.

There is a strata layer mask that you can use to drive coloration/etc of the strata lines, along with a mask showing where it is exposed on the terrain surface. 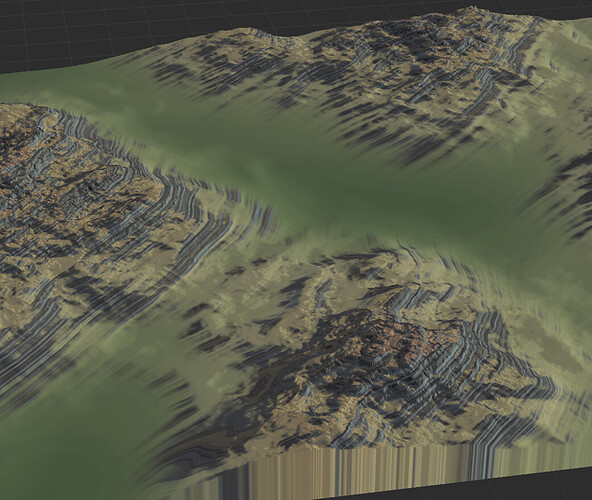 I always found it cumbersome to create accurate striations with “terrace” node. Used geoglyph and geoglyph 2 for that until gaea came along. Never did my “stratification” in world machine.

Since the “strata” device (the one Stephen mentioned and showcased above) appeared in the alpha builds here, that issue has been almost resolved, at least in my case. Now there’s “terrace” for “terracing”, and “strata” for “stratification”, and that’ll make a lot more sense when it lands in the dev build!

For now, you can use “distortion” input at high values in advanced perlin to create some natural looking stretching, the noise you’d plug into “distortion input” can be masked to limit where these “stretch marks” appear on your terrain. While not exactly strata, the shapes created can be incredibly interesting. Some trial and error there, and you may open a whole new pandora’s box of base shapes lol! Try it.

@Stephen - Excellent news! The more I learn about Artist’s Point, the more I look forward to it! It really is fortuitous to have this new Strata device developed just when I start wanting it.

@WFab - I’m discovering that the method I stumbled across depends on a high sharpness/shaping setting to get anything to show up. I have heard a lot about GeoGlyph, but couldn’t afford it, and now it’s no longer supported for new builds of World Machine. I did not like Gaea when I tried it out, but that might have been the limits of the free version. Either way, I always had to do everything in World Machine, so it pleases me every time new features are added that increase what I can do.

I had noticed that high value distortions produce such stretching, but I had not thought of trying to apply the results to terraces. I’ll definitely have to play around with it, following your suggestion.

For coloring the strata of a terraces device you can combine the terrain pre and post terraces to extract differences, then apply a clamp to normalize or an equalizer to make the differences more prevalent. This result can then be fed into a colorized and should give you exact strata colors, even if the terrace device has modulation applied.
You can also use a ramp set to keep full height to increase the number of strata or change it up a bit

Thanks for your tips, @JakBB!

Those are two of the best method I’ve worked out so far. I’ve also had good results Subtracting the Terraced terrain from the source, at around 85% or so, then feeding the results through Local Heights at about 98%, then into Bias/Gain to modify the weight. Convexity pulls out some good details, too. I’ll have a “Project of the Day” to post tomorrow with some of what I’ve worked out in it.