So, I don’t know if this is just something I’m being a little bit stupid about or if this is a bug that anyone else is getting but in the new LTE build the layout view seems to only show the part of the world I’m working on. There also seems to be no way of manipulation new extents. In previous builds, there would be a panel that came up attached to the main sidebar that would allow for all of these features but I can’t seem to find it! Any ideas? Have I just toggled something without realising?

I’ve attached a screenshot from one of the tutorial projects to show what I mean below: 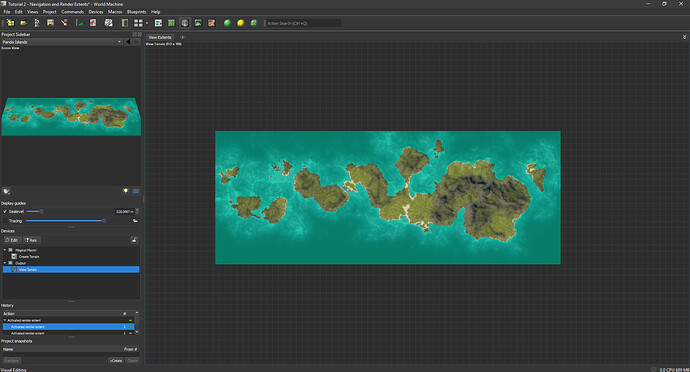 (Other than this issue, the new build is awesome by the way!)

Not a dumb question at all. For the 4000-series builds, the Layout view has been changed to display only the results of the current render extent. I believe that this generally aligns better with what you want when editing a device visually. The price of viewing the entire infinite world defined outside of your render extent is that many devices would display differently/incorrectly from their final build result, which was very frustrating when trying to edit and tweak your output in that view. The new system fixes this problem.

The expanded view now completely resides within the Explorer view. The render extent editing also resides there, as it IS often useful to be able to see the entire world when adjusting the extents.

Jump over to the Explorer view. Click the globe icon under “View source” to view the expanded world around your render extent.

You can then edit the render extents visually by changing to “Scene Setup” mode in the toolpanel there.

Under ten minutes with a concise and detailed answer. If that’s not some world standard customer service, I don’t know what is!

It makes sense making the switch over to the Explorer view. Again, the new build is looking great!

I’m fairly new to this software but already I don’t regret making a purchase. Thanks, man!