Clamp is Expanding Instead of Clipping in Macro

Your bug report should include: 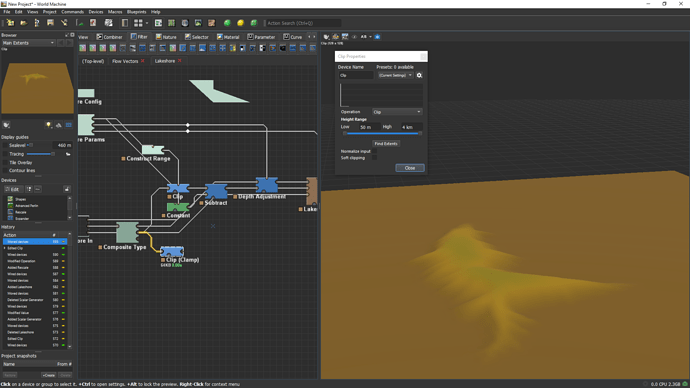 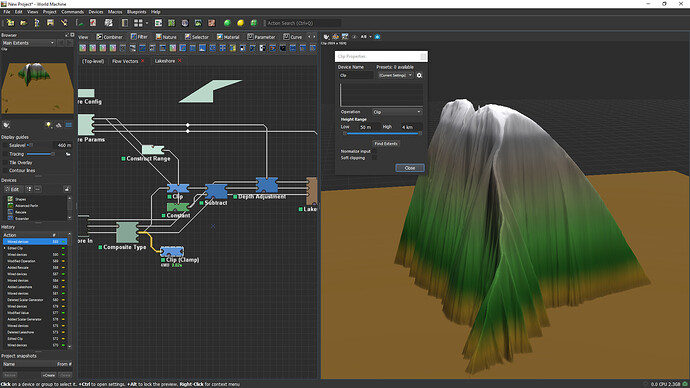 Edit: Debugging further, I discovered that the output for water depth (when I select the wire itself) has the same effect, so it’s the Composite Type device, not the Clamp, that has the issue. Again, this is only happening inside the macro. The same component outside the macro does not behave like this.

it can be caused by the huge difference in resolution. At 128x128 preview resolution, you can lose a ton of detail. Still quite a difference and strange, I gotta say.

I’m not sure entirely what’s going on here. I downloaded your TMD file and was not able to replicate the situation - is it a reproducable problem for you?

I’m waiting for it to render now. I did try to replicate it in another, quick build and saw the opposite effect, where the preview output of Water Depth was normalized, but after the build it was the right depth. This same world also won’t export without crashing. The crash report has been filed on that problem, though.

Edit: Finished rendering. The macro output now almost matches the prototype, so the Composite Type device worked normally this time around. Very odd. I’ll let you know if this problem comes back, but it’s looking like an operational glitch. Something buggy about the session, rather than the components.

There is a bug that I have encountered but not been able to reproduce where sometimes build results get confused/corrupted; this may be that issue. I haven’t spent the days needed to track it down yet mostly there is some internals refactoring coming soon that will likely remove the issue.