Continents - Project of the Day

This is a return to the kind of work I got into using World Machine for originally, creating fantasy world maps. I’ve shared an example of this sort of thing when I had a bug with my rivers and ocean, but that was really a work in progress, not a finished world. So, when another user brought up making world maps I decided to create something a little more complete and meant for sharing.

Although World Machine is supposed to go up to continent scale, to make working on continents practical, it is necessary to work at a smaller scale. I’m not sure what scale I ended up at but I started with a 100 km square extent and my base noise was at a 100 km Feature Scale. Once I was working, I changed Extents to suit the landmass I chose to work with, so everything from that point gained an entirely relative scale.

By my estimate, I ended up around 1.25% of full scale (World Units), so what I built would not be possible any other way in World Machine. The Feature Scale just doesn’t support it. Aside from that, and the absence of selectors for things like climate zone and weather, my little world ended up with some very nice rivers and island chains. I used Shapes and Distortion to create my desert mask, so there’s a nice division of temperate and arid land.

continents 211103 01.tmd (1.2 MB) - At 4K, this build sent my laptop into memory paging during the render, so depending on your memory you may want to change the render size before you view it. I can’t speak for the quality at lower resolutions. I really want to build it at 8-16K, but even discarding the intermediary steps, my system might not be capable of it! 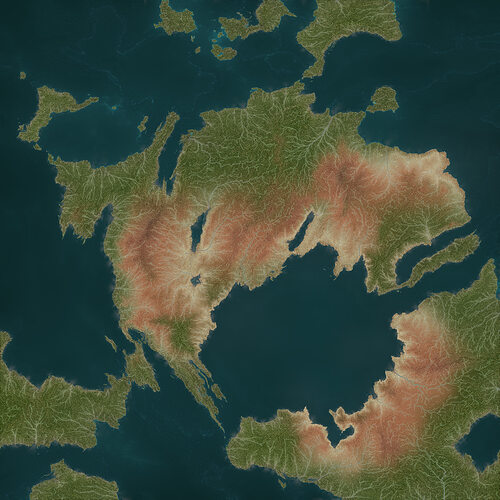 Although World Machine is supposed to go up to continent scale, to make working on continents practical, it is necessary to work at a smaller scale.

I’m wondering why it was necessary to scale it down. Could you elaborate?

@HYLK - The technique I use to create the base shapes of the continents involves using a positive and negative Basic Noise with Feature Scales set at 100 km and 80 km respectively. The largest it can get is 192 km, so that puts an upper limit on the size of the resulting continents. Technically, they’re just large islands until you scale down the height range to turn them into continents.

You could also use the Advanced Perlin device instead of the Basic Noise, as it goes up to 512 Km.

So, Artist Point also allows devices to flag a parameter as a “soft range”, which means that the slider will only let you set within those limits, but you can directly enter any value you want.

I haven’t enabled it for many devices yet, and there’s currently no hint in the UI that this is allowed in those entry boxes (open to suggestions! Current thought is a subtle border color around the value box and a tooltip). For those reasons I haven’t talked about it.

But the newest device version for Basic Noise has this enabled - you can set it to arbitrarily large values.

Great news! I was always frustrated that my scaling down for continents meant I could not really zoom in on one part for a more detailed local environment. Now I would be able to, which means doing a little revision of my whole approach to doing continents. I am curious how arbitrarily large noise gets handled in the visual editor, since I end up “searching” through that in explorer mode to locate good continent shapes, once I’ve set up the base parameters.

Well, I gave it a shot, but at 50X scale (roughly the difference to reach continental scale) the 3d viewport could not handle it. You can see to the edges of your work extents, but you can’t zoom out far enough to get a bird’s eye view. That makes working on a continent extremely difficult. Until World Machine changes to work with very large (or also on my wishlist, very small) terrains, I’ll have to stick with the scaled down approach to continents.