Next Up: Artist Point 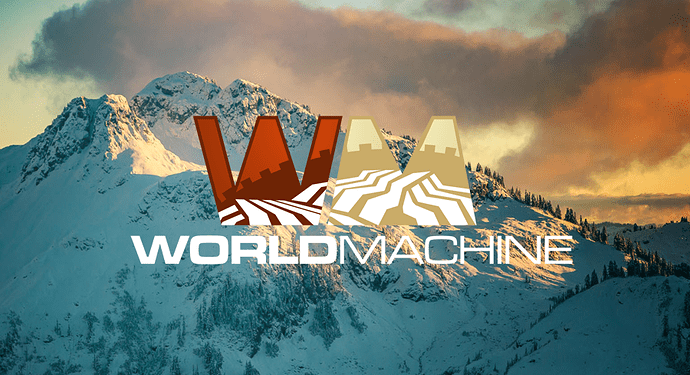 The purpose of the next major version of World Machine is to modernize and enhance texturing workflows.

The marquee feature: support for Physically Based Rendering. Over the past few years, PBR-based workflows have become standard and converged around a typical set of texture maps that define your material. With the new ‘Artist Point’ builds, you can create and view these materials within World Machine.

Here’s what we set out to achieve:

… along with some other very useful improvements and non-texturing devices.

Whew! This is what we’ve been up to over the past 6 months. 🙂 Not all of these will be complete and present in the first couple dev builds, but it gives you a roadmap of what to expect.

For this post, let’s just take a look at the first two bullet points.

You’re most likely already very familiar with physically based rendering in your other software, so it doesn’t need an extensive intro here. Suffice to say that the result is a major step-increase in the realism of the rendering. The big differences are mostly within the rendering system shaders, where the equations more accurately model the behavior of light.

When creating content for your game engine or renderer, the biggest difference is that a single diffuse colormap no longer describes the behavior of your material.

Typical PBR channels (and those supported by WM) are:

The easiest way to introduce the new PBR material system is to show how it differs from how you would previously make a terrain. Here’s the ‘Simple Great Rocks’ example world modified for Artist Point:

For this scene, we changed from just using the diffuse texture directly, to also creating roughness, and ambient occlusion maps for our world.

The Scene view now accepts either a bitmap or a Material. The material type is a composite created in the Material device that can contain all of the above channels. Here’s what the world above looks like:

Some dramatic lighting there! Immediately you can see how the roughness map is being used here to create the effect of “wet”, shiny areas of rock.

Most of the time, you’ll have more than one material in a scene. Sometimes, many more. You can easily combine together Materials with Choosers, or the new Layers device (which we’ll talk about later).

The viewport lighting controls have also been upgraded to allow you to control not just the sun direction, but also the lighting colors, exposure settings, and some simple viewport fog / atmospheric perspective.

Being able to view your world closer to its final form within World Machine is a big win for productivity, and lets you play with a lot of things within WM that just wouldn’t make sense to iterate on previously.

Most artists these days have extensive libraries of PBR assets they’ve created, purchased, or downloaded. From high quality production-ready textures from Quixel or Substance, to great free CC0-licensed textures from sites like https://ambientcg.com/ or https://polyhaven.com/, PBR textures are everywhere.

You can easily import these into WM and use them in your creations. Use the “From files” mode in the Material device:

This loads all of the texture resources of the material into a localspace device, which means that it exists independent from your render extent. To place into your world, you can then use the Instance Tiler or Instance Scatter devices to.. well.. tile or scatter your texture:

I think you’ll find the new material system to be both intuitive and easy to use.

Next time, I’ll talk about some of the other new devices that will be appearing in the new builds. Until then!

Hi Stephen, those screenshots look spectacular. The future of World Machine is bright (and shiny, thanks to the roughness maps).

Hey, a few small questions from a game artist who is beyond excited for this release

Will tesselation be a thing in this release as well? Normal maps are nice of course but just imagine the insane close-ups you would be able to get if you actually had that geometry!

How in-depth will the shaders be? Will there just be one PBR shader with a tiling amount slider? or will we have access to manipulate the UV coords and mapping

Will tri-planar mapping be a thing to cover those steep areas properly?

PS: - if you add volumetric fog along with the above features, world machine could be easily used for some sweet final renders! (I know volumetrics is probably waaaayy too much to ask for but it is an incredibly powerfull piece in an artist’s toolbag XD)

The first dev release of Artist Point supports PBR materials primarily while creating whole-world materials. You can tile and scatter the materials any way you wish onto the terrain.

The plan is to also add the ability to directly view splatmap-driven PBR terrain textures within WM. This has been long-sought, as it finally closes the loop to let you see what your actual result will look like while still editing in WM.

This is still planned, but won’t be in place for the first release. Sub-geometry tesselation & triplanar shading starts to become useful once this occurs