For this project, I tried to create an interesting terrain without using any of the perlin or voronoi generators. This ended up utilizing a lot of curve nodes combined with each other and then piped into the “custom curve” input of a curves device. The only advanced perlin generators used were in the texturing process. I’m actually really happy with how it turned out, let me know what you guys think! 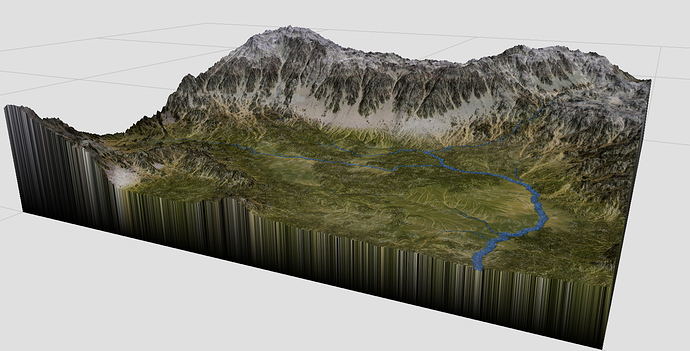 Very cool! Would like to see the node network if possible

Ahh, unfortunately with test stuff like this, unless I come up with a really cool method, I don’t usually save, I just kinda screencap the results and move on. Since this had basically the same results as using the noise generators, it just took longer, I didn’t save the project, so I can’t show you the exact node network from this image.

I did, however, because I felt bad for not saving, just very quickly do an example of what I did. I don’t remember if I made myself not use the perlin curve node, so for this example I definitely did not use it, just to be safe. 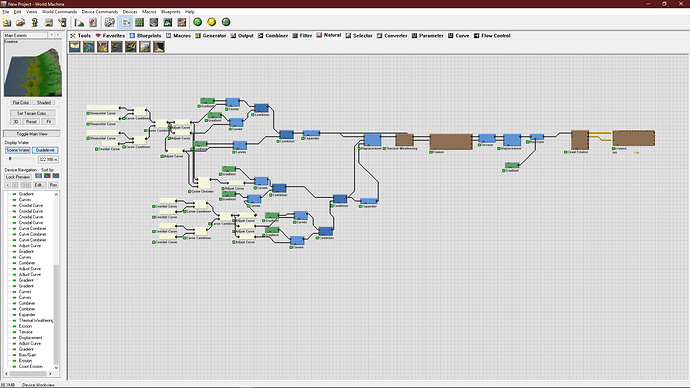 Interesting approach and nice usage of the Curves device! However, aside from just the “experimenting” part, did you find it useful or doing something better over conventional perlin based terrain generation?

Honestly, not really. I don’t see any real reason why I couldn’t make the exact same terrain using the built-in generators. It was more of an experiment to get myself out of my usual process and familiarize myself with some devices I don’t use often.

The only real difference I noticed over my usual process is the mountains in this look significantly more realistic than my usual ones, though I don’t know if it was as a result of the new process, or if it was simply a result of the seeds.

As an interesting point, I actually got the idea from watching your intro video for your upcoming tutorial series. There was a brief clip where I saw you starting with a gradient generator and piping it into a Curves device, and it got me thinking “What if, instead of simply drawing a curve, I used the curve generator devices?” It bypasses what I see as a weakness in the Curves device, where (at least as far as I’ve experienced), you cannot change the lowest or highest point values.

Thinking back on it, as I write this, the process had multiple gradients with the curve adjustments illustrated above (I’m almost certain, at this point, that I did use the perlin curve device), with each gradient rotated in 45 degree increments up to 180 degrees. This did create a sort of fine lattice effect in the final terrain, which may have helped to create more realistic erosion/thermal erosion results. I’d have to keep experimenting to find out for certain, though.

Funny to hear my tutorial inspired you to do this. The Curves device gains a lot of power when combined with curve generator, allowing you to create intricate shapes and effects, so I highly recommend playing around with it more often!

As to why it may looked more realistic, an important thing to consider is that the base shape of your terrain is really important and, if you get a good and convincing base shape, the natural effects will build on top of that already good basis, making it realistic. It sadly works the same the other way round, where, when fed in “bad” terrain, the natural devices tend to emphasise that “bad” terrain.