I would like to create a world map for a game. The scale is 21x21 km. For that i want to create some continents/islands and then place them within the 21x21 km map. How would this be done? I did create a small island, but I do not find how to control its scale when multiplying it with the large world map. If possible i do not want to create a perlin mask with a tiny island which roughly has the desired size within a single shape file. That would be rather inconvenient, i think.

What’s the easiest way to work on different island and then combine them in one large map?

The easiest way is probably going to depend on the tools you have at your disposal. Do you have a base map that you’re working on/trying to replicate in World Machine? If so, the easiest method would probably be to export each landmass separately, then manually place and resize them in a graphics editing program like Photoshop.

If not, my first thought would be to build the world out at the full 21km^2 extents, lay down your basic shapes and everything, then create multiple smaller extents for the specific areas to work in full/larger detail. Once every landmass is where you want it, export the main (full) extents. To keep all the fine detail you worked on in the smaller extents, you’ll probably want to do a tiled build, but I’ve also never really messed around with those, so I can’t be sure on that process.

Thanks for the reply. I start from scratch, so there is nothing by now than the single island I made. There is realy no way to insert it into a sort of predifined space alongside other islands, while having control over their scale relative to the map they get introduced into? That is strange and the program looked so promising. Multiplying the island with another perlin seemingly almost does the job, only a size setting would be needed for that. I also tried to export the hightmap of the island and then use the instance placer device, but also there I did not find any way to control the scale. You are absolutely sure there is no device or similar that I can use for that purpose?

The photoshop idea is not bad, that should work, but I was hoping for a more direct aproach, like a device to influence the scale of the inserted perlin or of the inserted instance. The app leaves the impression that it should be able to do that.

I guess I’m not entirely sure what you’re asking, in that case. Are you trying to make the world map as one project file, or have it split into multiple project files that later get combined? If you’re looking to do the latter, your best option may be the “File Input” device, where you’d be able to pull in any heightfield you’ve created, and have direct influence over the scale and positioning. My previous response was more assuming that you wanted to have one project file, but still be able to work on each area independently if required.

I would prefer one project file. My basic island gets created by a perlin and multiplying/substracting/adding a couple shapes with it. The resulting island i want to insert into a bigger perlin (or whatever i can use to create a bigger space that can house the islands i will create).

I basically want to create multiple islands in that project, but i dont want them to share a common perlin when creating them (different biomes, nothing in common and easier to work on seperately anyway). I would like to merge them together with one of the devices, to make them populate a large map. I need to be able to scale each island relative to the main map for that though.

I tried the file input device as a workaround, it does offer a scaling option when used with the instance placer device. However the result is wrong so far. The island gets distorted. It even changes size each time you check or uncheck one of the boxes (seems to be a bug). But even without that, the scaling unfortunately doesn’t give the desired results.

But from how it looks, the workaround via using fileinput with a hightmap exported from WM, shouldnt be necessary. I can create a 21km perlin. Why shouldnt i be able to insert an island created by perlin, shapes and combiners into it, while mainting control over its scale? There might be a way to use combiners or similar devices to insert things next to each other instead of blending them?

I basically want to create multiple islands in that project, but i dont want them to share a common perlin when creating them (different biomes, nothing in common and easier to work on seperately anyway).

You can use a different Perlin generator for each island/biome, for example like this (I gave the Advanced Perlin and Shapes devices arbitrary names for illustrative purposes): 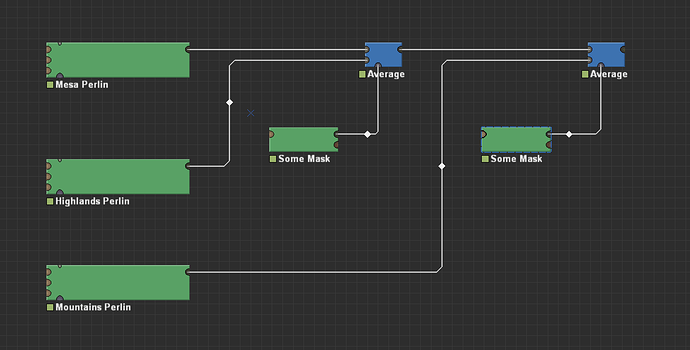 I would like to merge them together with one of the devices, to make them populate a large map.

This can be done using one of the combiner devices, I have a tutorial covering them

I need to be able to scale each island relative to the main map for that though.

This is tricky. It is the best practice to make sure you work in one scale within the same file. Instead of simply scaling the terrain/island, instead change the mask. This will prevent scaling artifacts and result in a more comparative/predictable terrain.

This is tricky. It is the best practice to make sure you work in one scale within the same file. Instead of simply scaling the terrain/island, instead change the mask. This will prevent scaling artifacts and result in a more comparative/predictable terrain.

I am not sure I understand what you are saying. The island / perlin is set to 400m. The perlin that is supposed to be the entire map is set to 21km. It would be quite inconvenient to create such a small island in a 21km surface perlin, it seems. Plus i want to be able to decide the islands positioning later on.

This can be done using one of the combiner devices, I have a tutorial covering them

Thanks for the tutorial, i watched it but I do not see how that can solve my problem. Maybe i worded it a bit misleading. I do not want to merge the islands with each other. I want them completely intact and untouched, the way i created them (with perlins, shapes and combiners) and have them sit next to each other, in a larger environment. Kind of what blattacker suggested to do with Photoshop. Create a couple islands/continents in world machine, export their hightmaps, and create a larger hightmap with those (ie take a black png that represents the 21km map, resize the islands depending on the size they are supposed to be and copy them into the black png). I would rather do that within worldmachine though, where i could see the results instantly, while moving around the islands, maybe scaling them a bit and still making changes to one or more of them etc.

Maybe i should also mention, that all i need in the end, is a hightmap of the result, which i can then import into the game.

Well, it depends on a how much control you want over the islands. If you are okay with a procedurally generated islands, you can simply move the mask around. Do note that the islands will not look the same when you move them.

A workaround that retains scale, shape and such is to create that island in local space. You can then use the Instance Placer device to then move it around, just like how you would otherwise do in PhotoShop.

To set it into local space, do the following: 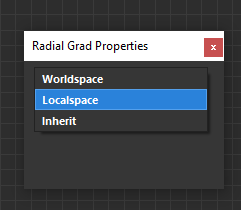 Thanks for this! It looks pretty much like what I have been looking for. I think I understand now why the scale from the perlin doesnt translate into the instance. After all the scale is more about the surface composition, than about the actual map size.

I realy like the result of the perlin perlin equalizer rescale combination in your example, just before the voronoi gets added (although I like the sea floor too). Fascinating what effects can be achieved and how it is done. Is there a collection of devices or macros anywhere, with a focus artistic results rather than natural appearance?

Is there a collection of devices or macros anywhere, with a focus artistic results rather than natural appearance?

Not that I’m aware of. But it is fun to explore and experiment!

Why do the outer dimensions of a Shapes device change, when switching it to local space? Can I prevent that or do i have to manually adjust existing shapes / switch to local space before I start adding shapes?

Yes it is true, the default local space size appears to be a 8×8 Km world. I think this is intended behaviour as WM 3029 also shows a Shapes world in local space to be 8×8 Km. You cannot change this afaik.

As somebody who is doing map for games I am strongly recommend to NOT have everything in one project. Do points of interests in separate projects, each part one project (various hero mountains etc…), build it in high res with all necessary masks and put it together in main project.
For game you will need to tune very small details (in scale of meters) and for 21km map this means to make at least 8k build EACH iteration. And you will iterate a lot. You will make map in two weeks and spend 4 months by iterating and tuning small details.
Game map must be playable, not only look well. Also it is not random, usually it has some given shape and geography, so this increases number of devices by order of magnitude. And that complicates things a lot. So it is much faster to tune details of hero mountain in 2k-4k build in separate project, instead of doing 8k+ builds to see any change in one big project…I also tried to have one big project and I failed

Btw current standard is cca 0,5m/px (it was quite common in 2015 already), so imagine resolution of final build and your ability to really take advantage from such resolution…
I can say, that generating map for game is many times harder than just making random scene, importing in VUE/Terragen, pick some nice angle, add vegetation, add some mesh rocks, cheat a little bit by using other height maps as background and you have perfect scene. Not gonna happen in game. It must look well form each angle, cant be random and must be playable (character must be able to walk over terrain, not going from hole to hole). 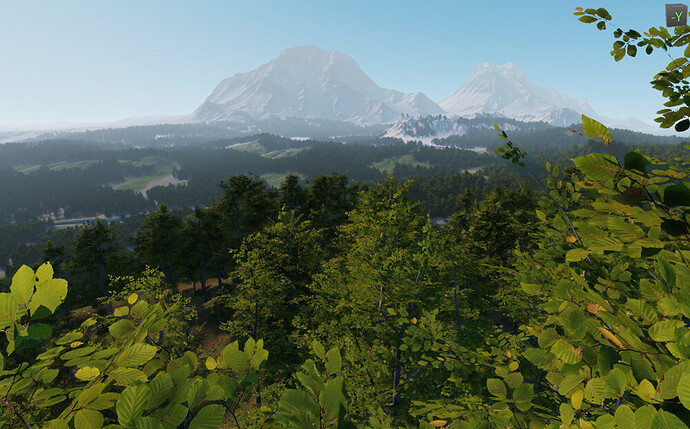