Haven’t been able to find anything on this so far, so if I’ve just missed a forum or blog post about it, let me know. It might just be due to my inability to describe the issue.

Since upgrading to the LTE version, I’ve been having this weird issue where the color inside devices just randomly leaves the device and goes all willy nilly over the node network. I’m not sure if that’s the best way to describe it, so I’m attaching a screenshot just to be sure. 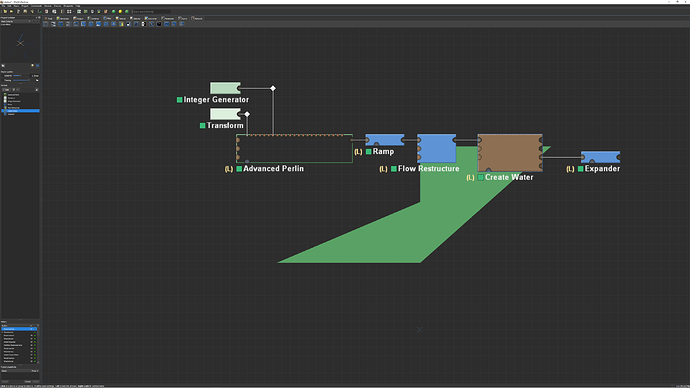 In this screenshot, it’s happening after a network has started to be set up, but the same issue will crop up even if there’s only one device in the network.

Including tech specs in case it’s a problem with my computer/hardware rather than a known software issue.

Issue is present at lower resolutions, across all tested display cables (DisplayPort, HDMI, VGA, and DVI), all display scaling sizes, and when using an Nvidia GTX 760 (the only other GPU I have on hand). The shape of the colors once outside of the device is not consistent, it kinda just flashes all over the place.

I’ve had this a few times as well, but not sure in what build this was since it has not occurred recently.

It does appear to be more of a driver issue than WM itself I guess? Not really sure.

I’m using the latest version available in the update center, and same goes for my video driver (though, admittedly, I don’t know much about AMD cards, so this may be an older one that maxed out at a much older driver, so take that with a grain of salt, I just bought what was available since Nvidia caused a bit of a GPU crisis)

Yea I’ve had it on all the LTE builds, including the latest.

I’ve personally never had this happen to me, but I’ve seen it happen sometimes on a friend’s WM.

@chad and @HYLK what processors do you use, if you don’t mind my asking? The only major notable difference I see between my build at @Delta_Research’s build is Intel vs AMD CPUs. Or possibly amount of RAM, but I also experienced it for the very short time I had LTE working on my old desktop before it fully died on me, and that had a similar amount (24GB, although it was DDR3)

Well there goes that idea. Next idea: What’s everyone’s OpenGL Version? Maybe that has something to do with it?

I’m starting to suspect that AMD cards have this issue, but I’m not 100% sure yet.

The issue persisted when I switched to an Nvidia GTX 760, including on a different build that didn’t have any AMD Graphics drivers installed. I’m not ruling out the AMD card, since it does appear, at least so far, to be more common on those, but I suspect there may be a different underlying issue.

Huh, this is very odd!

I haven’t encountered anything like that, but I don’t have an AMD-based graphics card here for testing.