There’re many new features and renaming in the LTE version. I tried out 4027 today and it’s hard to search for some old devices by names.

Are there any things like dictionaries or similars to help me translate these functions into 4000+ language and be able to navigate better? Tutorials are mostly in 30xx versions and is not helping much.

Thank you so much in advance! Love the new UI btw

You can press tab and search for devices by name. The workflows however have changed indeed. The best way to go about learning is just go exploring the tabs and start adding devices. Any “specific question” you have you can ask here itself.

Otherwise @HYLK has some new tutorials to get you started. Here’s his youtube playlist of tutorials.

Thank you so much! I will look into the tutorial tmr!

My guess is that the new workflow requires us to use a separate device to adjust some of the options, but i don’t know where to look for those. In addition, some devices are skimmed to encourage using the built-in (opposite of the former), which confuses me big time…

@jake_lee Rather than thinking about how the system works, think about “what effect you want to achieve”. Then the answer will be easier to search.

The new version is extremely flexible, and adapts to your way of working. But it takes some tinkering before it gets familiar. Use the “Example files” included with your installation (Menu bar “File>open example world”) to learn a bit if that’s your style. The help documentation is currently being updated for the new version, at least node reference should be complete by the time next version releases as stable build.

Here’s the “Official User Guide”. Should answer some of your questions. Everything is WIP though, subject to change as the release draws near.

Most all of the renames have the old name tagged, so if you search for “Layout Generator”, the Shapes device will appear in the list, for example.

I think that’s the rename that’s been giving people the most trouble. Are there any others you’re running into that don’t show up on a search for the old name?

I’m guessing you might be getting tripped up by changes to the Layout View. In legacy WM, the layout view existed as a view mostly for layout generator devices to use. This is still true, but it also serves as the editing viewport for all current and future other devices that let you edit visually, which will be increasingly many.

The Layout View had a couple buttons that would automatically attach a new Shapes device to your selected device. This was convenient, which is why it existed

But you can achieve the same thing in 2 clicks by by adding a Shapes device and connecting it to the mask input of your target:

There are good reasons why those buttons had to be removed, and there is a plan to replace them with something much better. But I will say that I think they were used more heavily by beginning World Machiners than I expected. I’ll see if I can get the replacement feature bumped up the queue a bit.

Cool! I haven’t known this…

I guess it’s just inevitable that new version will lack guides and questions and docs etc… Gradually I think these stuffs won’t even be a problem anymore, at least once this new version’s been there long enough

I’m really liking the ‘Tab’ to quick search stuffs and the slick layout, both of which really discourage me going back to 3028 version… I think many people feel the same way as I do. And thus we kinda stuck at this newly developed version (don’t wanna go back to the old version anymore), and got this lack-of-guides syndrome i guess…

Anyways thanks for the help! At time like this responsiveness really makes me feel more at ease trying new stuffs!

yea I haven’t look at the example world ever since I started out. I guess it’s time me looking back into it!

It appears like magic… And all the long I thought you implemented some kind of ‘Fuzzy search’ which only return the closest result rather than the exact result (if none exists)… Don’t know that it’s actually the exact. Thanks for the tips Stephen! 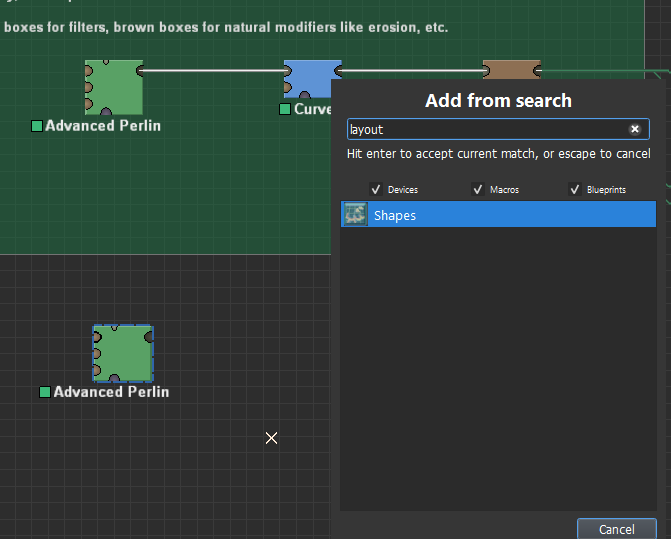 My guess is that the new workflow requires us to use a separate device to adjust some of the options, but i don’t know where to look for those.

That might be the case, but also check to make sure some of the options you’re looking for aren’t now hidden behind a “Show advanced settings” checkbox. While a lot of the devices appear stripped down for user-friendliness at first, a lot of them still have all their old settings available, just behind the aforementioned checkbox.

I’m going to try to add a help center article shortly detailing the differences where people have been having the most confusion. When you’re learning a program for the first time, it’s definitely frustrating if your tutorial is out of date and doesn’t match. This resource should at least help match up the “old way” to “what I should do instead”.

If there are any areas you encounter that things work differently than 3028, please post them here!

The article is here:

I tried to make very explicit not just what to do instead, but also why it was changed.