Scale a terrain by 4 while keeping its general character

So, I have built an island in an extent sized 8.072km x 8.072km, with the project elevation set at 3.072 km. And I’m pretty happy with it! But far later in the development I have noticed that it is a bit too small for what I want to do, and it would work much better if it was 4 times bigger. So I enlarged the extent to 32.288km.

How would I scale that terrain, while keeping its general character and all the features I already have in it? I understand that in order to do that the first thing I would have to do is to multiply the maximum elevation by 4 as well (please correct me if I’m wrong), but how do I do that for the rest of the terrain?

If the area is too small, it means you must increase the in the x- and y-axes, but not in the z-axis as well. If you’d do that, it’s just making everything 4 times as large, so everything takes in 4 times as much space.

What you’d rather do, if possible, is spreading out the features of your original terrain if you want to add new features in between them. And that’s also the tricky part, and it really depends on how you’ve created your world. Best case scenario, you’ve created each separate feature in local space, which allows you to simply drag the instances around. Worst case scenario, your terrain is fully procedural and built on noise. You could try to increase the feature scale of all the noise generators, but I doubt that it will translate well.

So, depending on your workflow, it can be easy to fix, or a real pain in the butt. Maybe you can share your node-setup and we can help you a bit more?

It is indeed fully procedural, built on noise devices and operations on the result of that noise… I wasn’t aware of other ways of building terrain really

. Could you please point me to learning resources about creating features in local space?

I think it will probably be a pain, so I have two options: either I create more islands and convince the artists that’s a good idea, or I learn how to rewrite my terrain in local space and figure something out.

Could you please point me to learning resources about creating features in local space?

Creating a feature in local space requires you to have all the generators that are used to create the feature, to be in localspace instead of worldspace (see gif below).

However, having to do this for every generator takes quite some time, so a, imo, better alternative, is to put all devices of a given feature, in a group. Then, set the group to localspace instead! This requires you to only change one parameter, and if you ever decide you no longer want the output to be in local space, you can simply change one parameter.

Then, on adding a local space feature to your terrain, you can use the Instance Tiling device. You must use a previous version of this device, as the current version no longer allows you to place a single instance (@Stephen can this be fixed, or can we have a proper device for single instances again?). Open its settings, and set the Distribution parameter to Solo Instance. 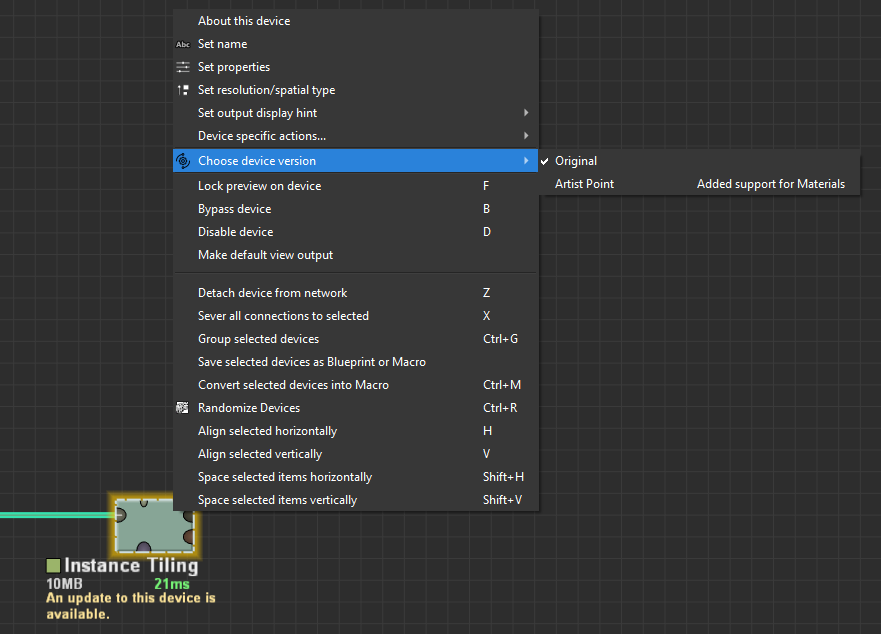 Then, simply blend in the desired feature in the location you want, using a combiner of your choice. Make sure you also correctly scale the height of the instance, as the old version does not properly scale that as well.

I think this is the better option.

or I learn how to rewrite my terrain in local space and figure something out.

This is easier said than done. You can’t simply “put it in local space” and be done with it. What you’d have to do instead, is to put your whole terrain in local space, and then cut out each feature separately. Then you have an instance of each feature, and that instance can be moved. This cutting out procedure can be very difficult.

Before we get any confusion, I don’t think a procedural workflow is wrong or inferior, and it is my preferred workflow as well. Using instances has its own myriad of problems, mainly in blending of the terrain, natural effects and masks. So in what cases does instancing shine? For example, when working with islands, or “hero” objects, like a hero mountain in an otherwise flat area, like a volcano. If you create each separate island in local space, you have the freedom to move them about later on, to your liking. Same story for the volcano.

When not to use instancing? When creating a mountain range, I don’t think it has a benefit, as a mountain range is essentially one big hump rock(layers), being eroded away. In essence, it is one instance, and therefore, it makes no sense to cut it up in separate mountains (I mean, where lies the border of a mountain really?), and then, after you’ve create all your mountains, you must blend them together again, and redo all the erosion and such anyway.

Whoa, you wrote a primer on the subject. Thanks a lot, mate!

We are still in pre-production so hopefully it will be easier to have more islands with more suitable geology and keep the one that is giving me problems on the background. But I will work on a few terrains in localspace to get the gist of it. Today I learned something.